Whilst not actually harmful, verrucas are often a source of embarrassment for many people suffering with them as they are generally fairly unsightly to look at.

Verrucae are actually a type of wart (a plantar wart) and are usually found on the soles of the feet or around the toe area. They are thought to be caused by the Human Papilloma Virus (HPV), which is highly contagious and can be passed on by direct person-to-person contact.

Thankfully verruca generally respond well to treatment, so if you have decided that you would like to have them removed then Pro. Clinics are here to help!

There are various methods available to remove verruca, but one of the most successful methods involves freezing them using liquid nitrogen, which is the method that we favour at Pro. Clinics.

The treatments are very quick and take just a couple of minutes, and is also almost painless with just a mild stinging sensation caused by the liquid nitrogen as it freezes the verruca.

Once the verruca has been frozen, it can take several weeks before it disintegrates, and depending on the depth of the lesion a follow-up treatment may or may not be required.

It’s important that you thoroughly research any clinic that you book in with, so it’s worth pointing out that Pro. Clinics have multiple 5-star reviews available to read online on various platforms such as Treatwell, Facebook and also Google. 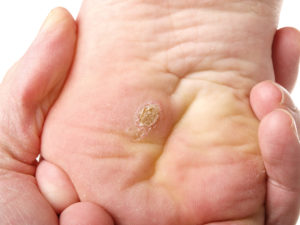 What is Verruca Removal?

Commonly referred to as warts, verrucas are slightly different, although actually very similar in appearance. They appear as a small round lumpy growth protruding from the skin and are often found with little dark flecks, or dots on the surface. They can occur singly, or sometime in groups.

They are actually caused by a virus (human papilloma virus) that often infects the skin and are most commonly found on the hands and feet. The viral infection is very contagious and can easily be picked up from another infected person.

The virus works its way into the skin and affects its structure, causing a hard lump of infected tissue. The tiny dark dots or flecks that are sometimes visible are actually small blood vessels showing on the abnormal skin surface. The verruca removal treatment aims to destroy the virus, by freezing the wart using a device called a Cryopen. Some people may try an over-the-counter remedy, that aims to dissolve the verruca away over time. Warts and verrucas are very stubborn to treat, are often resistant to treatment and take a lot of time and persistence to remove.

Verruca removal using cryotherapy is considered a very safe procedure, however there are a few side effects that you should be aware of. We have listed these side effects below:

Can I have verrucas removed if I am pregnant?

At Pro. Clinics, we will not treat pregnant or breastfeeding women for verruca removal.

Can children have verrucas removed?

Yes, because of the reduced discomfort, we are often able to treat younger patients without distress. You will be asked to fill in a parental consent form before your child’s treatment.

Who else should not be treated?

What are the benefits of verruca removal?

There are many benefits in having verruca removal, although we always stress a verruca is perfectly harmless and does not necessarily need to be treated. That said, we understand that verrucas do not look nice and can therefore impact a person’s confidence.

We have listed some of the benefits of verruca removal below.

By having the treatment, you remove a source of irritation. Whilst verrucas are not dangerous, they can become sore.

The greatest benefit for people having a verruca removed is their increased self confidence. Especially in the summer months, the verruca can be very noticeable and can often make people feel self-conscious about their appearance.

Also, as verruca are contagious it is a good idea to have them removed as soon as they appear so that you do not pass them on to other people that you may come into contact with.

As verrucas are usually fairly large, they often require a fairly long freeze time of thirty seconds. After the verruca has been frozen for 30 seconds, the clinician will allow the verruca to thaw out for a couple of minutes and then freeze it again for thirty seconds.

At Pro. Clinics our appointments are usually booked for fifteen minutes which gives us time to conduct a thorough consultation before your treatment.

What is the cost of verruca removal?

The cost of verruca removal starts at £90 per session. If a second session is required the price reduces to £45. Individual costs can be discussed over the phone, or at a face-to-face consultation. You may require more than one session depending on your response to the treatment.

Can verrucas be removed on the NHS?

Generally speaking, unless the verruca is particularly troublesome, the treatment will not be covered by the NHS, as it is deemed as a cosmetic concern and not considered to be dangerous.

What can I expect from verruca removal treatment?

The super fine applicator is held closely to the skin imperfection and liquid nitrogen sprayed onto the distorted, unhealthy tissue only. This is usually for 30 seconds, with a further 30 second freeze carried out a couple of minutes later. The lesion is then allowed to thaw and return to its natural colour.

Luckily the treatment is almost painless. The accuracy of the device that we use means that the healthy skin around the site of the lesion is less likely to be effected and therefore it is not painful. Treatment is generally very well tolerated, even by those individuals with a low pain threshold.

The sensation is similar to a stinging nettle on the skin when the nitrous oxide reaches the bottom of the area, but this diminishes quickly. There may be a little residual stinging for a few minutes after treatment and the skin may well will be slightly itchy for about ten minutes afterward. Occasionally a blister might form and persist for a few hours.

Does verruca removal leave a scar?

Freezing a verruca using cryotherapy does not usually cause scarring, although this will of course depend on your skin type and how well you follow the aftercare advice.

Hypo-pigmentation in the area (a small pink patch of skin, where new skin has formed, that is lighter in colour) may be visible for 2-6 months. This color loss may take longer to return in darker pigmented skin.

Is verruca removal the same if I have darker skin?

Repeated short freezing cycles are recommended if you have a darker skin type. This just means that you may need two sessions spaced a few weeks apart to remove your lesion rather than just one.

How long does it take to remove verruca?

The freezing process is very quick and usually only takes around 1 minute. However, after the verruca has been frozen, it can take several weeks for it to fully disappear. If the verruca is still present after a month, a repeat session may be required.

How long does it take to heal?

Most clients are fully healed after a couple of weeks, depending on the depth and size of the lesion. Verrucas usually assume a darker colour (this is the dead cells) after they have been treated and as the skin regenerates underneath it, it will gradually flake away.

What is required for post-treatment care?

After care is minimal as there is no wound or raw area. A small blister is not uncommon in the first 24 hours, although this is generally reabsorbed by the skin fairly quickly. The lesion will dry up, assume a darker colour and flake off in 1 to 2 weeks. It is very important not to pick at the area, as this will increase the healing time and could cause scarring.